Marks the Phasing in of Distillate Produced Onsite for Slane Irish Whiskey
SLANE, County Meath, Ireland, August 29, 2018 – Slane Distillery, the recently-opened whiskey distillery located on the historic grounds of Ireland’s Slane Castle, celebrated a major milestone this week when it filled its first barrel. The inaugural cask contains new make malt whiskey using barley harvested on the Slane Castle Estate filled into a sherry hogshead. It marks the start of phasing in distillate to Slane Irish Whiskey, a bold new take on Ireland’s legendary spirit, that has been produced onsite at the distillery.
“This is an important milestone for any new distillery, but one we are especially grateful for at Slane Distillery,” says Alan Buckley, Assistant Manager, Slane Distillery. “It’s rare that you get to build a distillery from the ground up, particularly one on grounds as historic as the Slane Castle Estate. That’s part of what makes this first barrel that much more special.”

The First Distillate from a Vibrant New Distillery
Brown-Forman, a leader in whiskey since 1870, in collaboration with the Conyngham family of Slane, began construction of Slane Distillery in late 2015 and introduced Slane Irish Whiskey in mid-2017. This unique triple casked blend of Irish whiskey was sourced from other Irish distilleries and was then matured using Slane Distillery’s signature Triple Casked method which uses virgin oak, seasoned whiskey and sherry casks.
“This is a very special occasion for my family,” says Alex Conyngham, Co-Founder, Slane Irish Whiskey. “We could not have accomplished this much in such a short space of time without the partnership, knowledge, and expertise of Brown-Forman, the talented production team at Slane Distillery and the support of the local community in Slane. I am honored to play a part in bringing whiskey production back to Ireland’s Boyne Valley.” 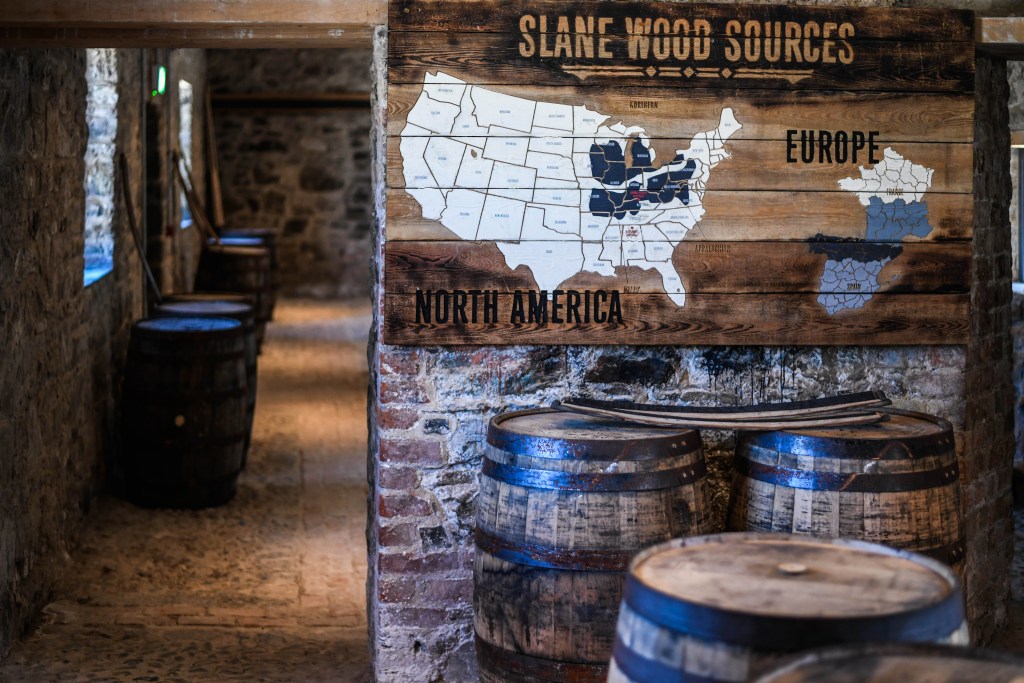 Marrying Gothic Structures and State-of-the-Art Distillation
Now in full production, Slane Distillery has the capacity to produce 600,000 cases. Slane Distillery is the first to be built by Brown-Forman outside of the United States. Brown-Forman invested $50 million in the distillery’s construction. Built on the grounds of the 250-year-old gothic farm buildings of the castle, Slane Distillery showcases a revival of the historic architecture on the castle grounds.
The working distillery features timber washbacks, state-of-the-art column stills and hand-beaten copper pot stills and a small maturation warehouse, while the adjoining Visitor Experience offers an interactive and immersive journey through the fabric of the Conyngham family tapestry and ancient art of whiskey making, including malting, fermentation and distillation.

A Commitment to Sustainability Throughout the Process
Sustainability is at the very core of Slane Distillery, a belief that is echoed by Brown-Forman, whose vision is inherently linked to environmental sustainability. Through this shared vision, every element of production at Slane Distillery is designed with the surrounding environment in mind – from spent grain used to feed local cattle, a fish ladder to assist salmon migrating up the River Boyne, inclusion of an anaerobic digester, a rainwater collection and recycling program and the creation of thermal energy on site which will, in turn, be used to partially power the whiskey stills.

Irish Craftsmanship and Innovation
Slane Irish Whiskey marries traditional Irish craftsmanship with innovation to produce a unique Irish whiskey through its signature Triple Casked maturation process. The liquid rests in virgin American oak barrels from the Brown-Forman Cooperage, seasoned American whiskey barrels and Oloroso sherry casks from Spain, giving Slane Irish Whiskey a more complex and robust flavor profile, while retaining a warm, Irish smoothness. Each of the three cask styles offers its own flavors, from toasted oak and vanilla, to caramel and butterscotch, and raisin and spice.