On a recent whirlwind adventure to the island of Barbados, we explored the world’s oldest rum distillery to learn how Mount Gay has not only survived over 300 years but has thrived through it all. The “secret” to their success isn’t much of a secret, and you don’t have to go all the way to Barbados to find out, the truth is, they just make damn good rum.

Barbados today has only 4 rum distilleries, though it has not always been this way. Back in the 1800s many sugar plantations and refineries also ran a small pot still, where they would use the “waste” molasses of the refining process to make Kill-Devil. This is what rum was known as then, as it was a rough, almost unpalatable, spirit. Unfortunately, there were a number of things that happened throughout the 19th century that slowly shut down the smaller stills. With the production of rum at this time producing very little financial return, many smaller stills shut down in the 1890s after the opening of the West India Rum Refinery. For more on this, and everything else you would ever want to know about the history of rum in Barbados, head over to Cocktail Wonk’s, Barbados Rum Cheat Sheet. 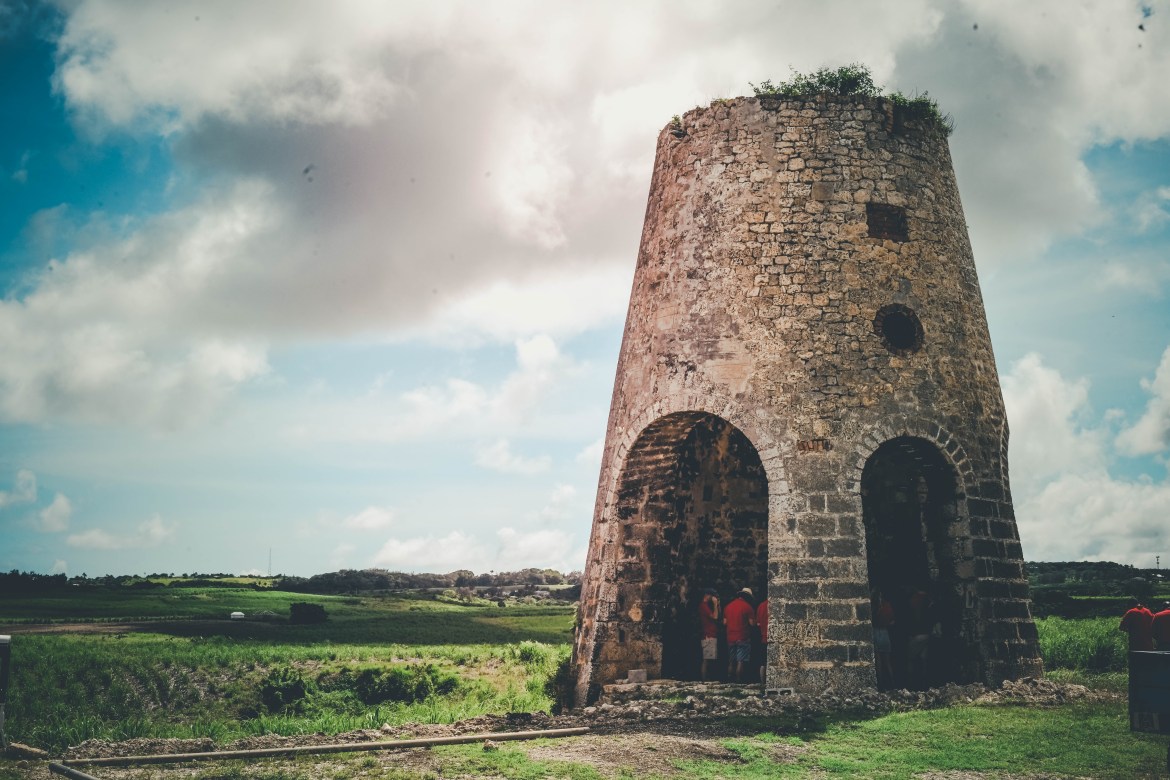 Through all of the trials and tribulations, Mount Gay Rum stood strong and continued to produce its excellent rum; in fact, Mount Gay claims to be the longest continually produced spirit in the world. You can even see on every label that the company has been producing rum since 1703, though, after speaking with the team at the distillery we found that there is documentation proving that the company is even older than that. In the beginning, Mount Gay Rums were produced solely though pot distillation as was the way in Barbados since column distillation wasn’t introduced to the island until 1893. Mount Gay didn’t change their ways immediately though and waited until some time in the 1920s before erecting their first column still. I’m sure it was a difficult, yet necessary, move for the company, as the use of a column still allows the rum to be more refined, and creates a product that is more approachable to the average consumer. Even though there are some of us (this guy) who absolutely love the rich, heavier flavors and aromas produced by pot distillation.

There are many factors that contribute to the quality of Barbadian rum, though most commonly are the amazing local agricultural products that go into it from the beginning, as it is with any product. First of which is the molasses, a product that was originally considered waste, derived from the process of sugar refining; molasses from Barbados is considered amongst the best in the world. Once the molasses is obtained, it is held in the open air fermentation tanks where yeast and water are added, which convert the natural sugars into alcohol.

The other significant commodity that contributes to the amazing Barbadian rum, is the local water. The island of Barbados itself is made up of coral limestone, which naturally filters groundwater into high quality, drinkable water. This water is then filtered an additional 3 times by Mount Gay before it is incorporated into the molasses blend and again at the end of the process for proofing the rum before it is bottled and shipped around the world.

Now that we have the “raw” alcohol, it’s time to refine it down to a potable spirit. As mentioned above, Mount Gay utilizes both the pot and column distillation methods; but what does this do for the end product? In its simplest form, the pot still will produce a spirit that at a lower alcohol level leaving in a lot of impurities, which translates to a distillate with more robust flavors. Whereas, by using a column still you are truly stripping out these impurities and creating a more neutral spirit that is higher in alcohol and lighter in flavor. 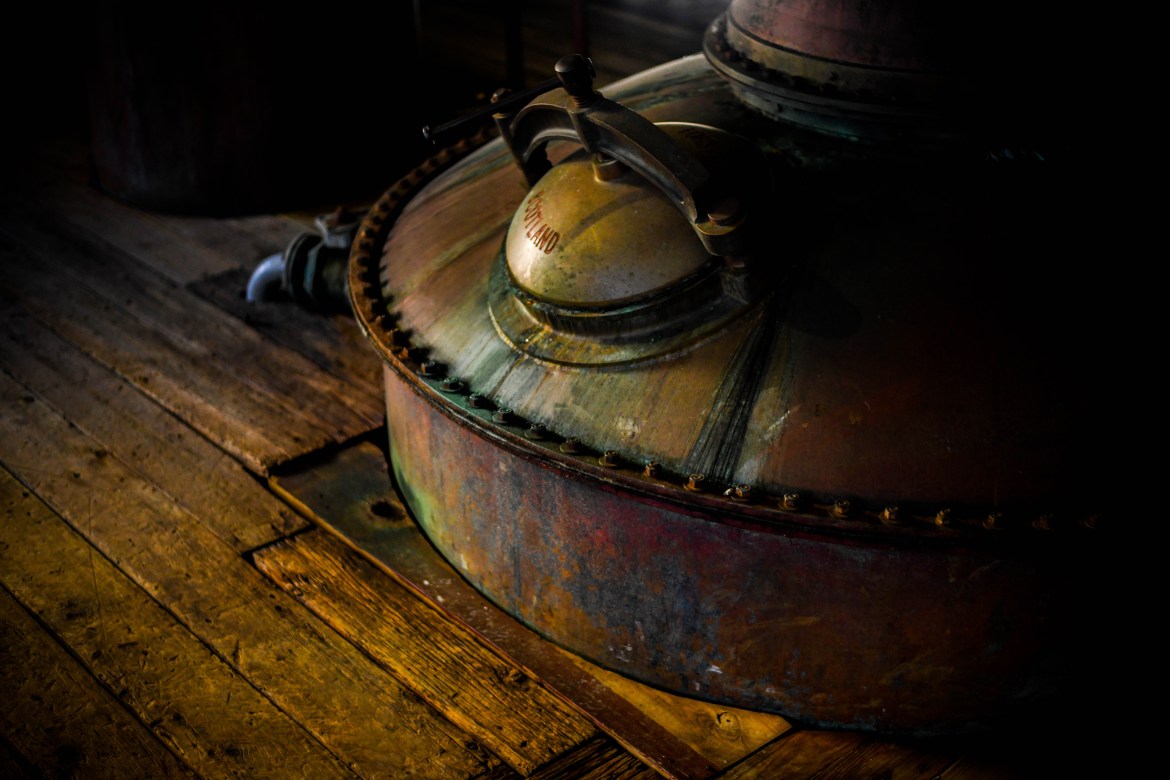 During the pot distillation process, the master distiller is constantly checking the distillate and cutting the heads and the tails. If they were to allow all of the distillate to run through and use all of it, it could be quite dangerous, so the distillate is “cut” into three parts. The heads contain bad compounds that will give you a real headache at best, and the tails are generally bitter and flavorless, so these are removed leaving you with the heart of the distillate. Depending on the distillery, the offcuts can be recycled back into the next batch, or dispensed in a different way. If you wish to understand this better, the Difford’s Guide has a great article on the subject.

After cutting from the pot still, the heart that remains is full of delicious rum flavor, and with every spirit, this is one of the best times to taste a product, straight out of the still while it’s warm. Here you can taste the true character of a spirit and really discover some of the nuances that will go missing during the aging process. This is the truth of a spirit, if it doesn’t taste good here, maturation isn’t really going to help you, but if it already tastes great it is surely only going to get better.

This distillate, both from the pot and column stills, is now ready for maturation and is transported to the barreling line, where it will be placed into barrels constructed of white oak. Mount Gay uses barrels that have previously contained American whiskey, though they are freshly charred a little deeper before the new distillate is allowed to rest in them. This allows the natural tannin and flavor from the white oak combine with the residual character left from the American whiskey to fuse with the rum and bring it to life.

Maturation is very different all over the globe, and due to the warm, humid conditions in Barbados, it is said that in a single year a barrel can mature the distillate it holds to the equivalent of 3 years when compared to Scotch. What this means is that when you are sipping on a rum that has been rested in a cask for 10 years the equivalent maturity in a Scotch would be approximately 30 years. 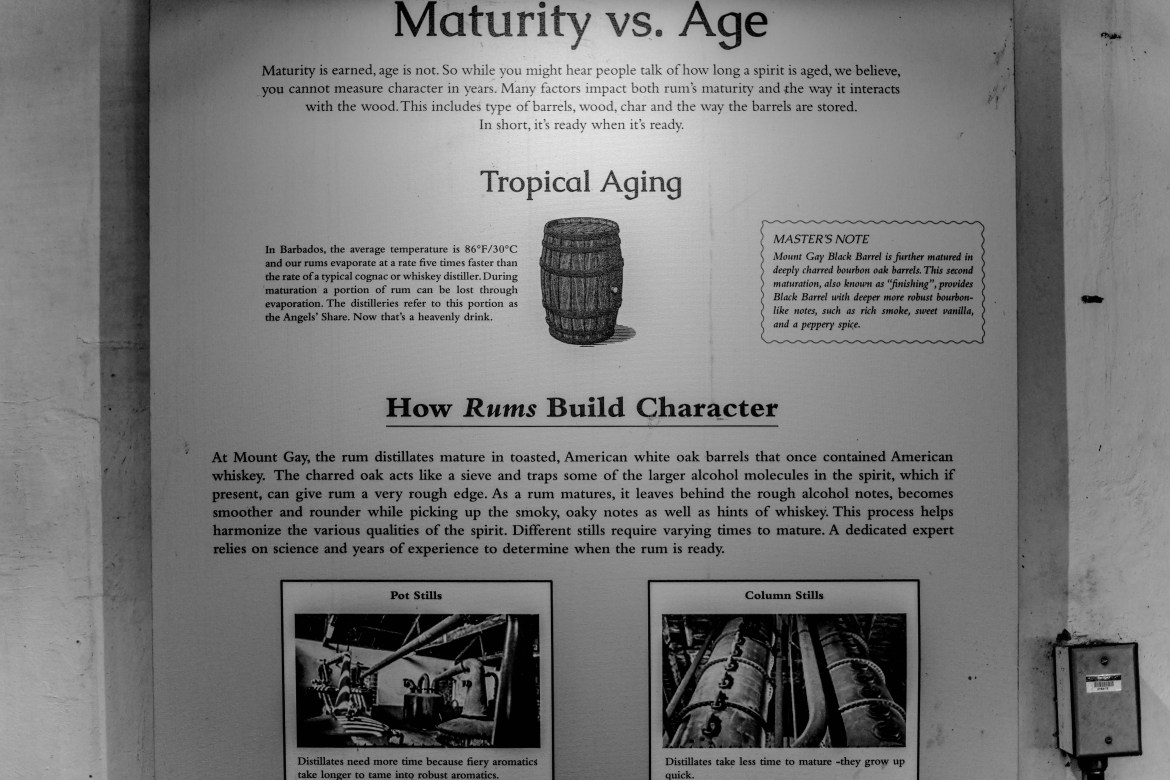 Allen Smith, the master blender at Mount Gay, now has a vast range of distillates to choose from when constructing the proprietary flavor they are known for. Not only does he have a choice of casks that have housed distillate from either a pot still or a column still. But depending on where in the warehouse the barrel is stored, it may have matured differently over any given year due to cooler and warmer areas in the warehouse. This gives a huge range of flavor as well as proof, or alcohol percentage, as the more a product matures and interacts with the barrel, the more liquid is evaporated, (commonly referred to the angel’s share) and the stronger the alcohol becomes.

From all of the options the master blender is presented with, they are able to re-create the perfect profile year after year. This is one of the amazing things about blended spirits, the ability to create the same profile time after time by bringing together notes and flavor profiles from dozens of individual barrels.

Top 5 spirits and liqueurs to delight your...