A Dry Plantation Citadelle in Cognac

I’m sure you’re wondering what exactly it was I was smoking when I came up with that title but I assure you there is good reason. Earlier this year when Beautiful Booze was exploring France we spent quite a bit of time in Cognac and visited a number of production houses. I’m sure you noticed this on our stories, and we have since put up a number of posts from our exploits, however, we kept the best content to ourselves so we could cover it later on.

Back to the reasoning behind the title. One of the houses in Cognac that you will be familiar with is the Maison Ferrand, they produce an amazing cognac under the Pierre Ferrand name and no matter what your tipple of choice may be, there’s a good chance they produce something just for you. This house manages world renowned liquescent specialties such as Pierre Ferrand Dry Curaçao, Plantation Run, Citadelle Gin and the previously mentioned Pierre Ferrand Cognac along with a number of other liqueurs, cognacs, rums and even a vodka; crazy right?

On our little adventure we had the absolute honor of Jacques who is not just a great tour guide but is actually the historian of the house. A day with Jacques will leave you baffled as to how much you truly don’t know about the history of cognac and of course his specific focus is on Maison Ferrand. This is one of the greatest things about Cognac, there are some brands that are just popping up but when you roam around the country side you find that more and more of the locals are descendants of those who made this product so famous back in the 17th century. The trades are passed down through the generations; this doesn’t only apply to the master distillers and blenders but also the frequently overlooked coopers, field hands and wine producers.

Of course the majority of our day was spent at the distillery, which uniquely runs almost all year round. Whereas most cognac distillers are only operating for a small portion of the year, Maison Ferrand washes out their stills and repurposes them to create other spirits and neutral grain alcohol for their liqueurs. Walking around the facility you can just feel the history within the walls and watching the team hard at work shows you how hands on some products still really are. The beautiful stills sit along the wall and occasionally you will catch a glimpse of the master distiller taking a glass straight from the still and raising it to his nose to check that the quality is up to par.

Walking around the corner of the distillery we were fortunate to wander through the small aging house on site where some of the extra rare cognacs and vintage demijohns were collecting dust waiting for their turn to contribute to a very special bottle of Pierre Ferrand Cognac. We were absolutely delighted to taste some 1936 Gran Cru Maison Ferrand Cognac directly from the demijohn. They of course have other storehouses on site, holding the newer cognacs, which are resting in French Oak casks from either the Limousin or Tronçais forests in France.

After a quick stop to enjoy a traditional French Lunch at Restaurant La Courtine, our next stop was the Plantation Rum aging warehouse filled with delectable liquid gold. Something I certainly didn’t know is that all Plantation Rum spends at least some time in the resting house in Cognac before it is bottled. This process, in my opinion, is exactly why the company is so successful. In the beginning Plantation Rum did not own their own production facility, but instead Alexandre Gabriel (President, and owner of Maison Ferrand) travelled the globe searching out the most promising barrels from small producers and was buying them up.

Sometimes the barrels would be left to rest at the distillery where he purchased them from for a while but inevitably they would be shipped to Cognac where their aging would be overseen by Alexandre and his team personally in a controlled environment before bottling. In the years since Maison Ferrand has acquired a number of distilleries, varying from small to large and just last year (2017), purchased the legendary West Indies Rum Distillery in Barbados. These acquisitions ensure the future sustainability and quality of the Plantation Rums.

Again, Jacques bought out his trusty “thief” (a tool used for extracting liquid from the barrel) and allowed us to taste a number of rums directly from the barrels while they were resting. There were a few barrels we aren’t allowed to mention as they are experimental barrels from unusual regions but I think everyone agreed that our top 3 from the day were the 1989 Trinidad, 1992 Panama and 2010 distillate from Peru.

Quite a few drinks later and we were back on the road, believe it or not the day was not yet done though as we had one more stop to make. We finally walked through the “golden” (green) gates of Maison Ferrand, also known as Château de Bonbonnet. Our first stop was the re-purposed living room, which now housed bottles of all the Maison Ferrand products for us to explore. Jacques allowed us each a glass of whatever we wanted from the shelves and it didn’t take long for us to decide on what we wanted and as Natalie reached for the mellow Pierre Ferrand Ambre I couldn’t help myself and opted for a few fingers of the bolder Pierre Ferrand Reserve. 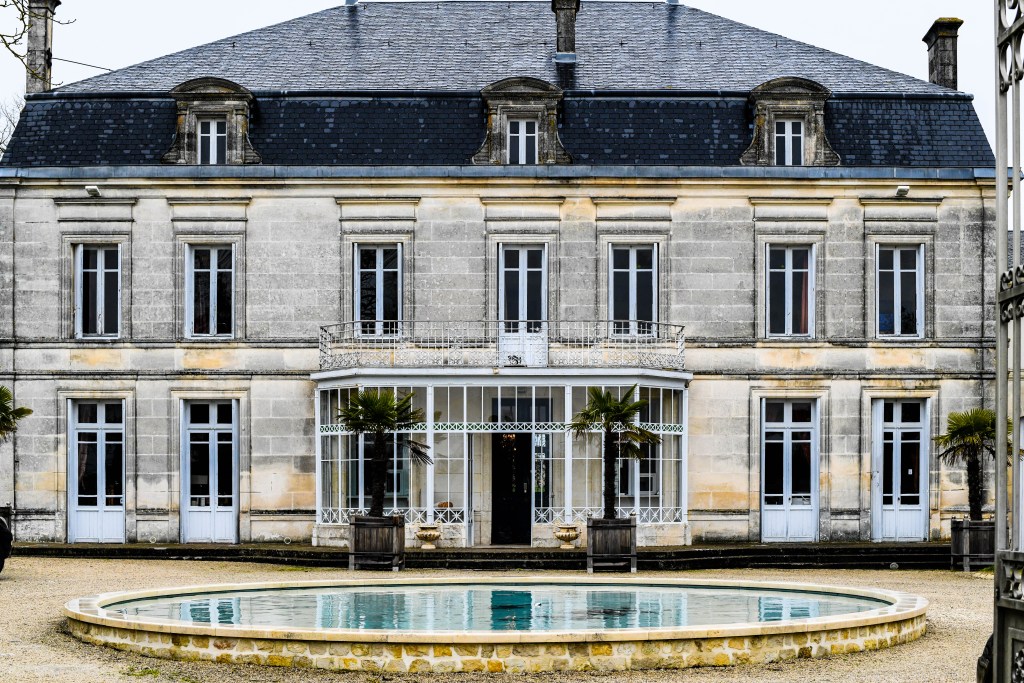 After a quick photo op, and with our glasses in hand, we made our way out to a side building on the property, of which there are many, but this one was special. What makes this one special you ask? This is where Citadelle Gin comes to life using their one of a kind patented infusion method, followed by 5 months of aging in 6 different types of casks and finally everything is harmoniously blended together to perfection in an oversized wooden egg; yup, an egg. There is of course method to this madness and the giant wooden egg is an unusual sight to behold when walking into any aging warehouse, however this method of blending is proven and is used in different methods of production all around the world. Actually, the first time we saw this was in Argentina at a number of prominent wineries such as Susan Balboa and Casa de Uco.

To be thorough we had to taste a number of the gins from different barrels nearing the end of their maturation, but the true treat here was selecting a few of the promising experiments under development fro a taste. The great thing about visiting these storehouses is the ability to taste products before they hit the market and sometimes these products never do for one reason or another. The down side is that we usually can’t talk about them, so you just have to take our word for it that there are some amazing things happening here, and there are some products coming out that I will be buying up as soon as they are released. 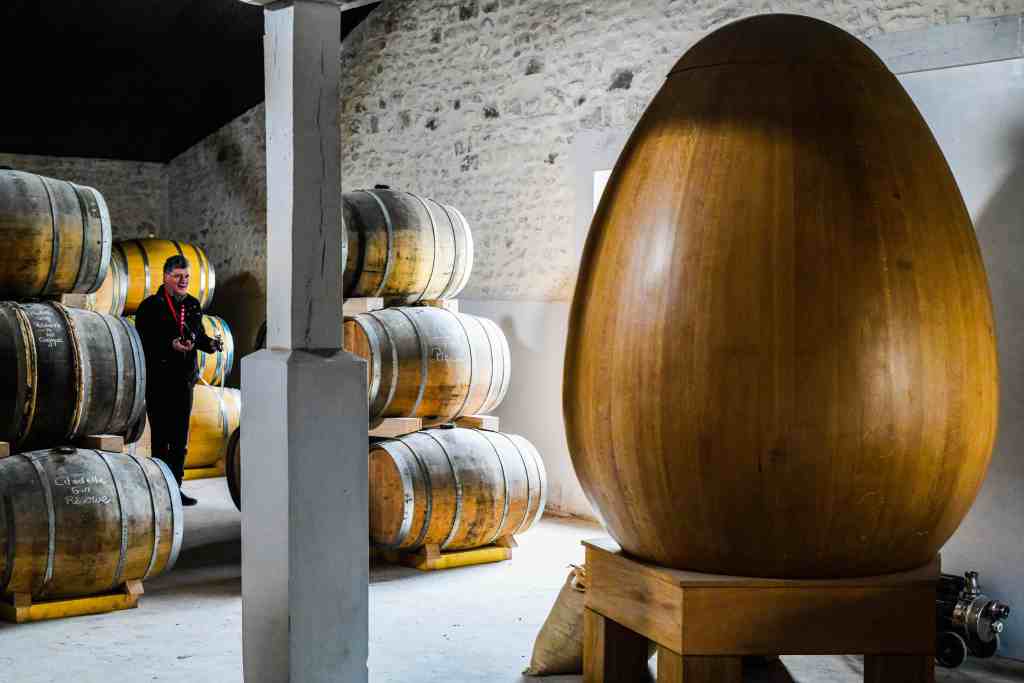 Sometimes you get a guide who just goes through the motions of a tour and sometimes you meet someone like Jacques, who is so passionate about what he does that it seems as though he truly relishes the opportunity to share his passion and knowledge with us. Thank you Jacques! 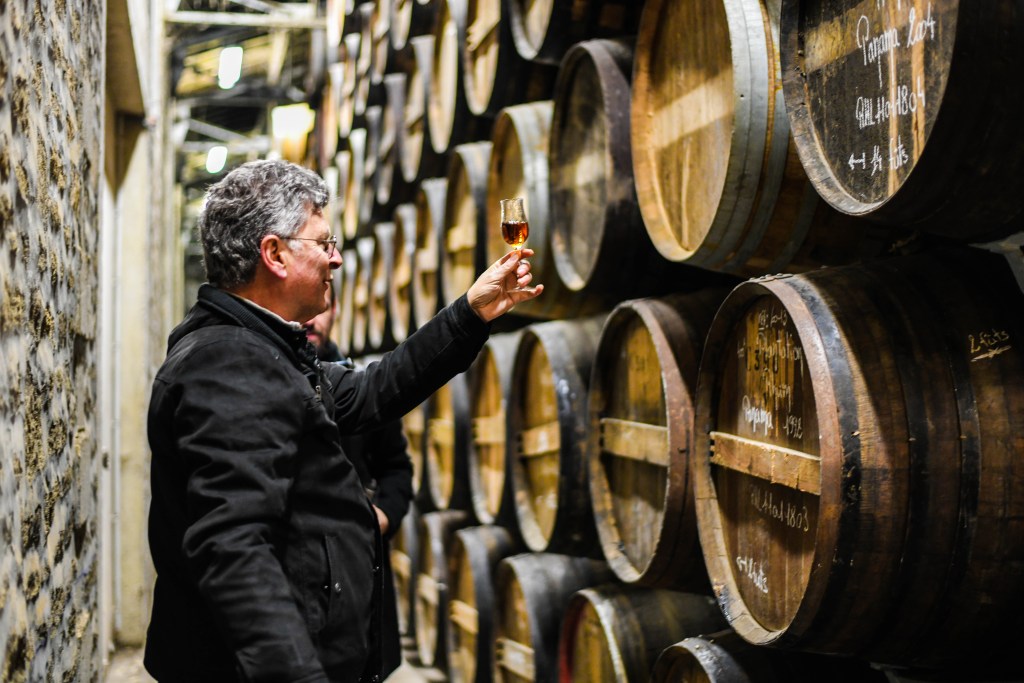 Rum Away With Me

3 Years of Travel Celebrated with a Banana-Pineapple...